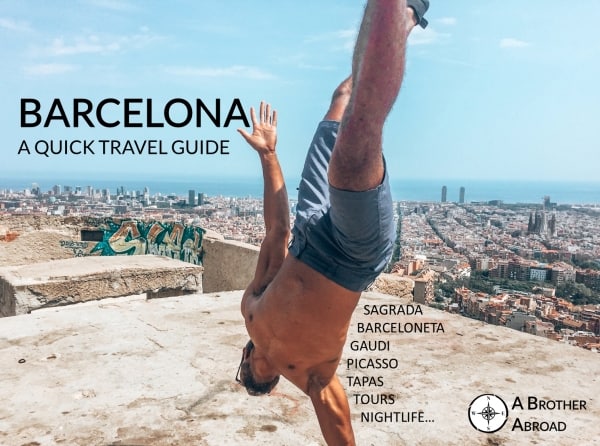 Amazing food, hundreds of years of architecture, and never ending nightlife sit sandwiched between the mountains and the sea.  Whether you have a day, a week, or a year, Barcelona sightseeing, food, and nightlife is worth it.

My Adventurous side says: I could urban hike through the hills and and swim in the until the sun comes up (and have) My Cultured side says: From Gothic architecture to unfinished, massive Gaudi architecture, the entire city is a piece of art on display that doesn’t get old. My Flashpacker side says: The food is amazing, the hostels are top notch, and its hard to not live the good life here.  It will be difficult to leave and I will definitely be back.

There are plenty of Barcelona sightseeing opportunities, but these spots cover the highlights.  Don’t miss the Sagrada Familia church, Park Guell, or the late night Barceloneta beach front nightlife.

WHERE TO STAY IN BARCELONA

The following sites were all of the stops on a great, free (tips only) walking tour that I did from Yeah Hostel Barcelona.  The tour was a great mix of interesting architecture and excellent commentary about the history of the Barcelona, Catalan, and Spain as a whole.  I highly recommend staying Yeah Hostel Barcelona for the comforts and jumping on the tour, but, if you skip Yeah Hostel then absolutely do this 2 hour walking tour on your own