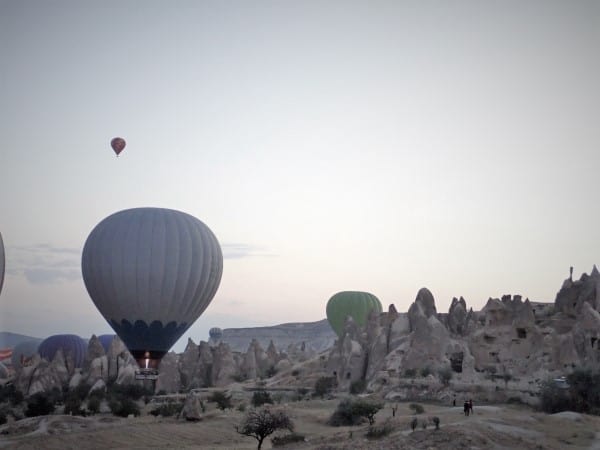 On this trip, I hit a new level of planning anarchy.  Even in Turkey, at its “level 3 security threat warning” according to the US state department, I decided to go with the wind.

For lack of time, I would not be able to make it to Pammukale, but Cappadocia could work.

The Cappadocia Green Tour specifically caught my attention.  I’m not normally one for tours, but the more questions I asked, the more intrigued I became with this region that had the looks and history of a fairy tale

Situated further east, and closer to Syria and Iraq, I was worried about the potential security situation…but if I’m seeing images of it on instagram, it can’t be that bad, right? In all, backpacking Turkey had been a much more safe and rich experience than I ever would have guessed.

I’d heard Cappadocia described as a place filled with amazing geological features, hotels and hostels carved into mountainsides, and impressive sunrises filled with hot air balloons taking visitors to explore early morning vistas from above.  To top it off, the Google Images were amazing.  Aaaaand the coin flip said yes.  So…

I was off to Cappadocia.  I booked a flight to Kayseri Airport and scheduled a shuttle into Goreme.  I was headed to Cappadocia

Cappadocia: A Land of Enchantment and Fairy Tales

When traveling long term, as you visit more countries it becomes a little more difficult to maintain a rich, intriguing travel experience because so many “one of a kind experiences” are repeated in so many places.  A waterfall here.  A beach there.  A cathedral.  A monument.  And so on.

For this reason, I loved Cappadocia.  Cappadocia is enchanting, and for reasons than are commonly known.

If you Google Cappadocia, you’ll likely see pictures of hundreds of hot air balloons scattered above the horizon during sunrise, with conical spires dotting the ground below.  This is a beautiful view and experience, but the “fairy tale” runs deeper than hot air balloons and geological formations.

Cappadocia’s ground is filled with soft rock that is easily blown by the wind into interesting rock formations overtime, or, into caves that can be lived.  As such, all through the Cappadocia countryside you will see rocky cliffs with windows and doorways to cave homes everywhere, surrounded by these spires that look like something Tolkien thought up.

But the story of Cappadocia goes even deeper.

After the crucifixion of Jesus Christ, the followers of Jess were left in a precarious position.  Hated and hunted by the Roman army, they fled east, running with no plan.  When they finally reached Cappadocia, they realized that the soft stone, with effort, could be a home and a hiding place from the hunting Romans.  So they dug.

The fleeing tribes dug immense networks of caves and tunnels, for living, for worship, for livestock, and for storage.  They lived above ground as much as possible, always using the fairy tale like spires as lookouts.  Whenever there was impending danger, the Jews ran underground taking shelter in the cave where they could stay for weeks if need be.

As the times and Christianity was accepted, many left, but many caves were still inhabited by devout followers of Christianity remaining from the original group and establishing a monastery that lived in these caves.

As such, Cappadocia is with secret passages and stories of a fleeing people hiding, surviving, and eventually thriving.

Waking up in Goreme

As I opened the big, wooden door leaving the cave of I was staying in, the cool morning air hit my face and a feeling of calm covered the yard.  The little black cat that would become my new buddy perched on the ground yawning.  No one was awake yet and I had the yard to myself as I surveyed Goreme.  My first view in daylight.

From the doorstep of my hostel I could see conical spires clustered in the distance with doors and windows clearly carved into them and surrounded by a dusty, Star Wars like landscape.

The yard of the hostel was strewn with tables, chairs, and hammocks overlooking a dirt lot where hot air balloons setup each morning launch upward with the sun’s rise.

I laid down on the hammock and watched as each hot air balloon inflated, and then rose into the sky and off into the distance, and then dozed off in the hammock as the last balloon floated away.

I woke up shortly after with the little black cat curled up on my chest and view of a now empty, dusty open field.

In the open field, a lone pair of trees were perched like an oasis and an oak colored grazed between them.  It seemed like an odd place for a horse to be tied up…but at least maybe I could get a couple good photos.  Just then one of my hosts showed up, bright and offering in a Colombian accent “breakfast?” I replied “absolutely” as I walked down the stairs into the open lot to get closer to the stallion.

As I walked towards the horse trying to remain calm…it ran off!

The horse wasn’t tied down, just free to wander, like all of the other horses in the area it seemed.  Shocked, I took a seat on a rock and took in the view, gazing into the distance.  As I came back to reality, sitting on the rock, the horse just walked next to me and looked vaguely in my direction, then returned to eating apricots that had fallen from the tree next to me.  That’s a nice start to the day.

My host waved for me that breakfast was ready.  Not as astounding of a spread as Ephesus, but still amazing considering it was free.  Some unique Turkish cheeses, freshly baked bread, olives, golden raisins doused in olive oil and a sprinkle of salt, fresh tomatoes and cucumbers, and of course, chai…and a smiley mug to ensure my day kicked off in the right mood.

As I finished my last few bites of breakfast and took in the view, my tour bus arrived. Today I would be taking “The Green Tour” of Cappadocia.

There are two “main” tours in Cappadocia:  the Cappadocia Green Tour and the Red Tour.  Both tours focus on touring the major sites of Cappadocia, viewing the one of a kind landscapes, and sharing the deep history of the area.  The only difference between the two is the “Green Tour” focuses on the north and the “Red Tour” focused on the south.

I’m not one for tours, but 1) I was on a fairly tight timeline 2) the distances were too far to hike and 3) I couldn’t rent a motorcycle – so for $38 I paid to be shuttled between the vistas of Goreme with 15 other travelers.

With that, the tour began…

The Panorama of Goreme

The first stop on our tour was a cliff side tourist trap with an amazing view of Goreme and a great view of the landscape. The geological features were just as impressive as I’d heard and stretched into the distance as far as I could see.

The second stop on the tour started as a slight tourist trap – Goreme Quartz, a store which specialized in selling jewelry made from precious stones.  I wasn’t a fan of this but a worthwhile treat was on the backside of the large jewelry store.  Pigeon Valley

In certain places, throughout Cappadocia, the flat landscape gives way to slopes and valleys.  At one such place, these slopes give way gradually and perfectly to a fairytale like view of the city of Goreme and the countless buildings within, carved into the rock and stone of the mountain as caves.  These buildings peak in the center of the city like a Tolkien version Disney castle.

Directly across from the various viewpoints you can see windows and doors dotted along the slopes between the viewpoint and the city.

The next stop on our tour was the cave city.  The cave city was an interesting attraction well worth the trip just as much for the history as it’s view.  If you’ve never seen an underground network of tunnels, like in Vietnam, this is an impressive must.  Even if you have, it’s still a must see site.

The underground city was first used by the Hittites as they were trying to evade the Romans after the Crucifixion of Christ.  During the same time, they were pursued by the Arab armies that wandered Anatolia at the time.

As beautiful as Cappadocia is, it’s generally flat landscape which is dotted with small hills doesn’t give many places to hide, so, the Hittites created a place to hide.

Over decades and centuries, they not only dig into the stone to create small caves in which to live, they also dug deep into the ground.  The result was a network of tunnels and large caves with a handful entrances that could be blocked in emergencies.  The landscape of Cappadocia, and the many spires, allowed the Hittites to see approaching armies early.  On signal, the entire village would retreat into the caves blocking the entrance.

At its height, this particular city could House up to 6,000 people for short periods – usually 2 weeks out of the month.

There are hundreds of such cities but, at current, there are only 10 open to the public in Cappadocia.  This site in Goreme is the largest of the 10 available.

Here are a few facts to get your mind going:

After the cave city, the wandering continued.

The next stop was an ancient cathedral, the Selime Katedrali, that later served as somewhat of an “ancient hostel”.  Merchants passing through the area were allowed to stay free and house their livestock for two nights, after which point they were required to pay going forward or continue.

Interestingly, George Lucas saw the wonder in this site decades before the rest of the world. This site was intended to be the shooting location of his original Star Wars as the landscape and the caves were exactly what he imagined.  Unfortunately, the Turkish government decided against it and George Lucas took his filming elsewhere.

The final stop on our Green Tour was the Open Air Museum.

The Open Air Museum is a site of a former monastery.  Wandering around the tightly packed cliffs you can see small caves that were living quarters and larger caves filled that were actually churches.  In some caves, requiring an entry fee, there are many frescos reminiscent of cathedrals in Europe.

With that, my day in Goreme was almost complete.

I only had one more thing on my list: experience a Turkey bath house.

However, that is an embarrassing story for another day…

For now, it was time to move from backpacking Turkey to backpacking Istanbul: the city that bridges worlds.

As rich as my experience in Turkey and Istanbul was, I didn’t nearly get to see everything.  If you’re planning to go, I recommend reading my 10 Day Turkey Itinerary filled with everything I did and loved, and all of the things I wish I had done as well