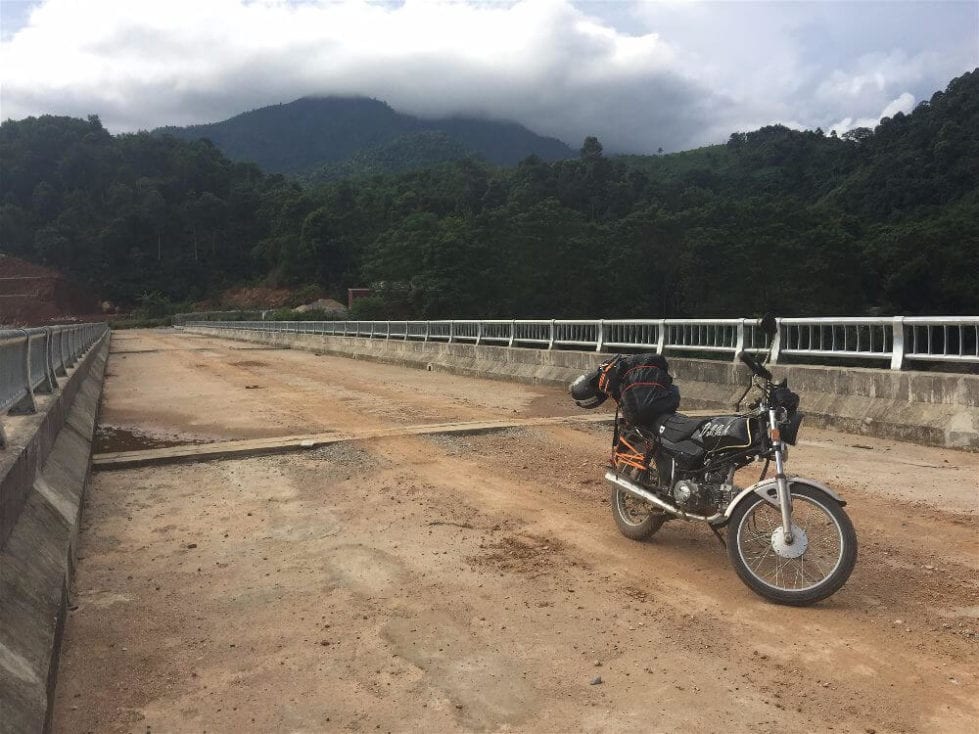 As I woke up in Bac Ha, my first thought was “Dear God, I hope I don’t have a hangover.” I’ve never experienced the effects of homemade rice wine served in a water bottle, so, I wasn’t quite sure how much it would take to give me that “I probably shouldn’t ride a motorcycle today” feeling. Lucky for us, I was just under that mark, and with the help of a Vietnamese coffee, a Thai Red Bull, and a cold shower I’d be ready to hit the road. I got up, packed my things back into my tiny backpack as Mark did the same, strapped all of my belongings back onto Delilah’s rack and then settled in for another Vietnamese coffee and breakfast while Mark went to get his bike serviced at one of the mechanics a few doors down. While I studied the guidebook looking for any recommendations on what to do in our next destination (Ha Giang) I thought, “Today feels like a good day.” Mark got back within 20 minutes. We finished tying down all of our bags and Mark remarked “it feels like we’ll have a good ride today.” Now, I’m not superstitious, but we probably should have knocked on wood. We got kind of cocky, considering how many miles we had rode to that point. Oh well…it’s all in the adventure, right? With that, we fueled up, and set out from Bac Ha for Ha Giang. After an hour I got hungry, nearly hangry, so I decided to stop off at a roadside Pho place for lunch while Mark decided to go ahead and meet at our next turn, in 69 kilometers. It made this a little interesting because if I sat and ate for, say, 30 minutes I would have to ride twice as fast to catch him. Challenge accepted.

The beginning of the ride was beautiful. Damn near perfect. The air was cool and the roads were dry as we cruised past more rice paddies with mountains stacked in the distance. After 15 minutes of cruising the road started to wind up a mountain. This, is my favorite kind of riding without a doubt. As I pretend I’m Valentino Rossi leaning into the Moto-GP worthy curves, I feel alive. Every once in a while I stop off at the side of the road and take a pic admiring how far into the distance I can see on a clear day, past farming villages and mountain towns. That road was amazing. And this is where things start to get interesting.

Things take a turn…for the dirt

As I reached the top of the mountain I was looking forward to the same kind of views on the other side going down, except I could go faster. Unfortunately, the mountain had something different in mind. When I reached the mountain top I crossed some kind of boundary where all funding disappeared. Right next to a sign in Vietnamese the road changed completely from a perfectly paved and spacious two lane road, to a road that was paved maybe 40 years ago and had been beaten to death to the point that it decided life would be better as a dirt road. For the next 69 kilometers (I forget what that is in miles, I’ve gone native), I rode Delilah over an old road turned dirt road with potholes 6 inches deep strewn about like landmines. At one point, a creek crossed the road. At other points, cars were driving about 5 miles per hour to avoid damage. I nearly went over the handlebars 3 times from underestimating how deep water filled potholes were. This ride was probably one of the hardest I’ve done and felt damn near post-apocalyptic. At some points, I felt a lot like Daryl Dixon from the Walking Dead riding a cruiser through a wasteland. It felt awesome. If I can find sponsors, I’m seriously thinking of doing the Dakar Rally now. Or at least making a TV show. If anyone knows if Ewan McGregor wants to do another TV show about a motorcycle trip in some random place, I’m heading to South America soon and could use his connections…and film crew…and financing…anyways…back to the story.

After 50+ kilometers of questioning whether it was seriously possible that a road this bad could continue for this long I finally arrived at a paved road, in some random city along the way. Just as we agreed, Mark was waiting near the intersection for our next turn. He looked beaten up from the jostling so we didn’t say much. We just took a break, found some snacks, and hopped back on the bikes because…the worst was behind us right? Haha. I wish. Not on this adventure. As we pulled out and hammered the gas, I saw dark clouds looming over the horizon. I don’t mind riding in the rain, if I have to. If I don’t have to, well, I get out of the rain as quickly as I can. So with that, I waved to Mark that I would meet him at the next intersection, rev’ed, and Delilah and I were gone at top speed.

So, if you’re considering a motorcycle trip in Vietnam, you should know…it rains here. A lot. Randomly. Do you remember in that movie Forest Gump where Forest talks about all of the different types of rain in Vietnam? “There’s rain, there’s big ol’ fat rain, there’s rain that comes in sideways, there’s rain that comes up from underneath, there’s even the stinging rain…” Well today it was sideways rain and stinging rain. On the upside, in the places most people ride the air is warm so it feels like being stuck in a nice shower, against your will of course, for however long you ride…except imagine that every 5 minutes someone jumps in the shower and throws a handful of BB gun pellets at you. That’s exactly what it feels like. And that’s why I hauled ass to our next rally point.

I got there in no time flat. I actually beat the Google Maps estimated arrival time. It wasn’t the safest way to move, but I was comfily hiding under an overhang on the side of the road while my bike sat next to the street at as a marker to let Mark know where I was at. I actually enjoyed it. I was 5 km out from Ha Giang near a traffic circle just watching people drive by, watching people shopping at a local market, watching the stray dogs play with each other. I feel like times like these, when my mind isn’t running and I’m just observing, are the times when I absorb cultures the most…or when shit happens. Shit happened.

I looked up curiously as I heard a crash and a yelp. I saw a dog limping off and a motorcycle toppled over in a muddy curve about 200 meters away. “Dammit,” I thought, “I hope that wasn’t Mark.” I sprinted over top speed in the heat of the moment forgetting I could have ridden Delilah over quicker. It was Mark. Mark wasn’t moving for a second, which had me worried. At that point I wasn’t thinking, just sprinting. The locals rushed over swiftly as Mark started pushing the motorcycle off of himself to free his leg. He got free and moved to the side of the road with a limp. My brain started running again “ok, he’s moving on his own, that’s good. Now for a systems check…” A local lady, her daughter, and a man got Layla (Mark’s bike) nearly back upright and I took Layla from them and got her to the side of the road while I assessed the situation with Mark.

Mark just ate it and he was worried about the dog he hit. Hell of a guy. Good heart. So, here’s how the story went…Mark was cruising at about 30 kilometers an hour when a dog bolts out toward the road. This is common in Vietnam. Chickens. Goats. Dogs. They all run out into the road, but they normally stop or run quickly enough to make it. They’re usually pretty smart. Usually. This one wasn’t. The dog sprinted out right into Mark’s motorcycle and somehow aimed for just behind the front wheel. Considering the dog ran out under Mark’s bike while he was going into a curve that was muddy and wet, it was too slick and too late to even think about slowing down or turning. With that, the dog ran right under Mark’s bike. He tried to avoid completely running over the dog, which is why he went down, but it was a little too late. But, within a few seconds, Mark got back up. I have to give it to him. Good stuff.

So back to the situation at hand. Mark is upright and Layla is back on the side of the road. I rush over to scan Mark – no broken bones, he’s coherent so he’s not in shock, and nothing’s twisted or missing. The only thing wrong is a 1 inch by 1 inch piece of skin missing from his elbow and a steady stream of blood coming down. I think to myself “it’s just blood, I’ll call this a win.” I ask Mark if anything is broken. He replies “nothing that wasn’t broken already.” The Vietnamese lady runs up with rubbing alcohol, cotton balls, and medical tape. Mark replies (as if she actually understands English), “I’m fine, it’s just blood. I don’t need it. I’ll ride.” That’s the beauty of traveling with another vet. Hell can break loose, but that’s kind of the plan so nothing’s that big of a deal. You have awesome days, and you have days that make other days seem awesome. That’s it. No bad days, as long as everyone comes home. With that said, in true vet style, Mark says “let’s get out of the kill zone.” Touche.

We hop on our bikes, my hands muddy as hell from lifting Layla out of the mud, and Mark cruising with a stream of blood dripping down his elbow. After 5 minutes we arrive in Ha Giang. It’s beautiful. This place is clearly a tourist town nestled next to the foothills of a chain of mountains. I have a feeling there are some epic views and rides in store over the next few days. We’ll see if the coming days end up being as “interesting” as today. All in all, beautiful views, twisting turns, unplanned adventure, and everyone still has their limbs. Today was a good day.