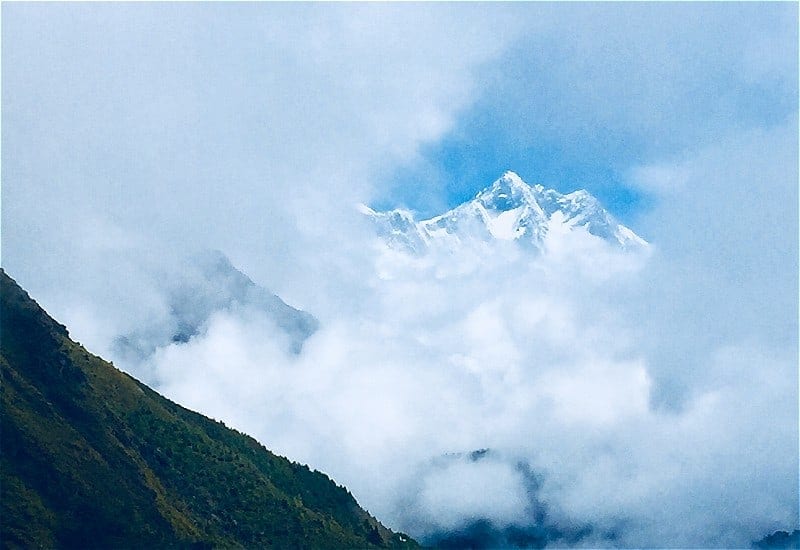 Namche Bazaar, home away from home and Sherpa metropolis on the Everest Base Camp Hike

At 11,268 feet above sea level, the familiar mountain chill felt oddly refreshing as I poked my head out of the down mummy bag.  My eyes focused passed the frozen water bottle and beyond the old plywood walls of the teahouse I spent the night in, through the frost covered windows, out into Namche Bazaar. The tin rooftops below cascaded one below the other, as the tiny hotels and shops terraced down the steep mountainside.  With fresh eyes and a rested head, the city of Namche Bazaar looked beautiful.

Then jump to our Everest page and start from Part 1 “Why go to Everest”.

Deep in the heart of the Khumbu region of the himalayas and a hub for Sherpa culture, Namche Bazaar gained its start as a transit hub and trading outpost frequented by the Sherpa, the mountain people of the Himalayas known for their superhuman mountaineering abilities.  Today, Namche Bazaar exists as a trekker heavy respite for those taking an acclimatization day, like me, on the way up and celebrating on the way down.

Given the altitude sickness risk I took by ascending from Kathmandu to Namche Bazar so quickly I decided to take a rest day to acclimatize, enjoy some good pastries, and trek up to the Everest View Hotel, noted as being “one of the highest hotels in the world” and the only one with a view of Mount Everest.  On rest days, it helps acclimatization to climb to a higher altitude than you’ll be sleeping at that evening.  So, the hike to the Everest View would provide a great view and some good preventative maintenance.  But first, breakfast.

Every teahouse along the Everest Trek has an unspoken, and sometimes spoken, agreement: guests stay for a heavily discounted price as long as they eat two meals per day from the teahouse kitchen.  The cost for a night is extremely cheap, usually between 200-400 Nepali rupees ($2-$4).  With my room being so cheap, I was more than happy to roll out of my cocoon and saunter downstairs to have breakfast made for me instead of hunting down something outside.

After a breakfast of attempted French Toast with a honey, lemon, ginger tea (to help acclimatize), I loaded my daypack with water and a Snickers bar, of course, and departed to wander the city and head for the Everest View Hotel.

As I turned left out of the Namaste lodge to head down the main street toward the center of Namche Bazaar, the city seemed even more charming during the daylight than it was during my fatigued stupor the day before.  A cobblestone road ran through the center of the town guiding trekkers in from Lukla between a smorgasbord of tiny hotels, coffee shops, restaurants, and pastry shops to top it off.  A Rasta themed cafe blaring Bob Marley’s …I wanna love ya!  And treat you right…” on the left.  The Everest café with a full espresso machine infecting the streets with the scent of pastries on the right.  And ahead were countless bodega like street shops selling trekking pants, jackets, boots, meds, and everything else trekkers may have forgotten in the haste of starting the trek.

As I wandered through and away from the center of Namche, the shops and restaurants gave way to smaller hotels, then teahouses and homes of locals, until finally giving way to open mountain pasture.  On the outer edges of the city, in the grassy backyards of teahouses, porters set up tents where they slept for the night near yaks, tied up to keep them from wandering off (the yaks, not the porters).

Namche is definitely the most suitable place along the EBC Trek to take a rest day.  This Himalayan mini-metropolis provides just enough of the comforts of home to keep the griping down and plenty of sites to discover and stayed entertained throughout the rest day.  The Sherpa Culture Museum and the Sagarmatha National Museum are great highlights to visit.  Internet is aplenty at the many coffee shops and, if you’ve bought a local sim card (NCell or Nepal Telecom), cell service (data, voice, and text) is consistently available.  I enjoyed it all as these would be the last creature comforts until my return.  After spoiling myself with early morning desserts and coffee I started the supposed 1 hour hike out to the Everest View Hotel for a cup of tea and a motivation boosting view of Everest (if the clouds cleared).

A Rest Day Hike to the Everest View Hotel

The Everest View Hotel is a common site to visit on the planned acclimatization day in Namche Bazaar.  The rule for adjusting to the altitude is “climb high, sleep low”.  As the hotel is situated slightly higher (271 meters) than Namche, the short hike helps the trekker apply this rule by stretching their body to its limits by day and adapting to the low oxygen environment as they sleep at night at the lower altitude.

The Everest View Hotel hike began on a trail heading north out of Namche Bazaar on several steep switch backs and ending on a plateau high above the U-shaped village giving an amazing view of Namche Bazar.  The trail then flattened out and wrapped around a steep mountainside.  If you’re lucky enough to enjoy this hike without the fog and clouds, you’ll appreciate the vertigo inducing views as the trail side gradually falls off the steep mountain.  The 1.5km hike only took 30 minutes but was refreshing and filled with great views

The trail then wound back over the mountain through shrubbery and brush past a now defunct airfield that is only used during emergencies and then continues leisurely over the mountain to the concrete front steps of the Everest View Hotel.  The crowd of tourists taking group photos and selfies  was a marker than the “Everest Hotel” placard hanging on the front of the hotel.

As you walk up the steps the lively, swanky, and social dining area will draw you in.  Keep walking and you’ll find the perfect place to have your snacks and tea on the back patio, while Mount Everest peeks out between the mountains and watches you dine.  In view, just to the north of the Everest View Hotel (opposite the direct of Namche Bazaar) about 17 miles away as the crow flies sits Mount Everest.  If the view is blocked by cloud and fog, give it some time.  Weather in the Himalaya’s is known to be fickle, so be patient…the wait is worth it.  My recommendation: Turn to the table behind you, make some friends, order a pot of ginger tea, and wait it out while you get to know some other awesome travelers.

I was winning my own race, with opportunity ahead

I sat on the outer edge of the stone patio for an hour after my tea-mates left, enjoying a coffee and rereading “Into Thin Air,” Jon Krakauer’s book on the 1996 catastrophe on Everest.  As I neared the end of the book I set it down to think: I was extremely excited about what I had achieved thus far and what was ahead of me.  I’d traveled across Asia, flown to Nepal, and walked this far with my own gear and under my own power.  That’s something to take pride in, I think.  In that same moment, I was reading about people who had climbed that mountain 17 miles away.

Mount Everest.  A barren place that towers as high as jetliners fly and where the air is so thin that the process of breathing alone would kill most people.  A place so austere that nothing survives there.  So, as I sat, proud and enjoying what I was doing, I was simultaneously  aware of how much further I could go.  How much more I could achieve.  What those people attempted overshadowed everything I was accomplishing in this moment.  So, was this discouraging?  Absolutely not.

I took pride in the idea that I was “winning my own race.” In the challenge with myself, to constantly grow and be better, I was winning.  I was accomplishing more than I did yesterday and a year ago.  I was stronger than I was yesterday and a year ago.  I was throwing myself into situations to make mistakes and learn from them, despite my fears.  I was experiencing the things I’ve always wanted to experience: walking through Himalayas, chatting with Sherpa, and seeing the tallest mountain on earth with my own eyes.

I was encouraged by the idea that life still had as many opportunities ahead of me as I was willing to take advantage of them.  Mount Everest was still there to climb for me, just like it was for them, if I was willing to make the sacrifice and take that opportunity.

I was winning my own race and I still had the opportunity for so much more.

Towards the end of my time on the balcony of the Everest Hotel I decided that in the future I would do at least one of two things. I would either climb Mount Everest or I would return to run the Everest Ultra-marathon which runs from Everest Base Camp to Lukla.

Then, I couldn’t help but realize how productive and inspiring hour that hour, in view of Everest, was.  At that moment, the chatter around me grew as the clouds cleared for about 30 seconds; just long enough to get a glimpse of Mount Everest, but too short for me to get a picture.  I love the little teasers that adventures drop sometimes.

After an hour of relaxing, awaiting a view of Everest and reading my kindle, I loaded my daypack and headed back to Namche Bazaar.  The walk down was clearly easier than the way up and the view down into Namche Bazaar by the light of dusk even more beautiful than it was leaving.  Following that view up with some of the delicious pastries from the Everest Bakery made a perfect rest day.  I’d save the Irish bar until the way back…that was at least one good decision I’d made so far during the trek.

That night, I continued my ritual, packing myself with dahl bat soup, garlic soup, and ginger tea until I felt like I was going to pop.  I headed up and treated myself to a wet wipe shower before hopping back into my cocoon and calling it a night.  Unlike the night before, I felt amazing.  One more night of sleep like this and I would be completely ready to make some more “adventure inducing” choices.

OTHER GREAT LINKS ABOUT THE EVEREST BASE CAMP TREK

20 thoughts on “Pt 4: A View of Everest and a Rest Day in Namche Bazar on the Everest Base Camp Hike”