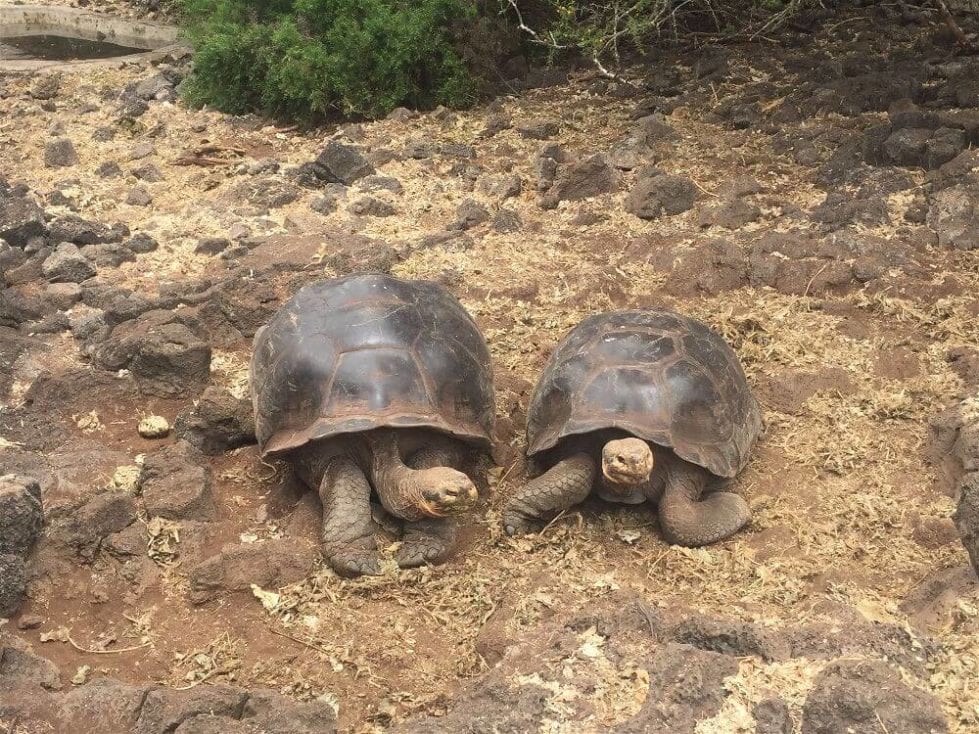 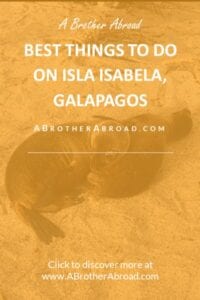 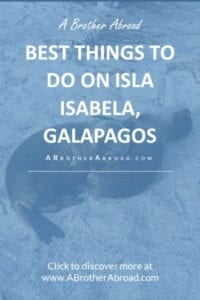 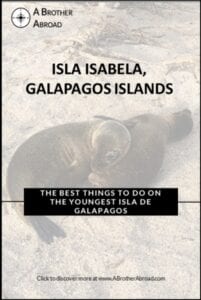 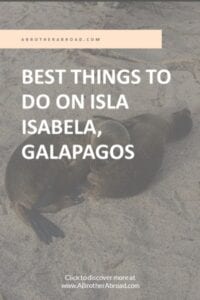 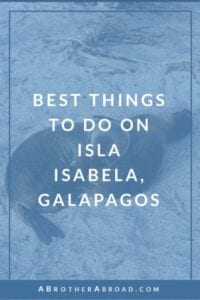 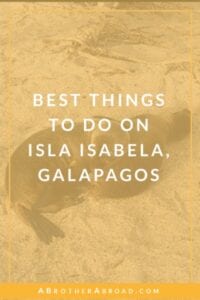 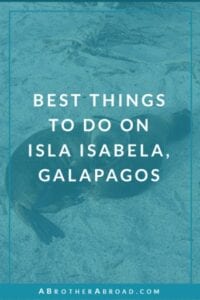 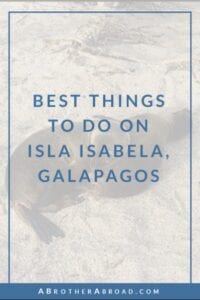 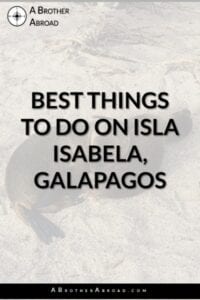 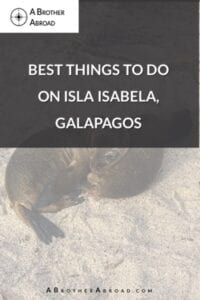 Isla Isabella is the least inhabited of the three main inhabited islands in the Galapagos archipelago.  This quiet island of 5,000 is a great place for epic snorkel tours and volcano hikes. The numerous things to do in Isabel, Galapagos will be memorable and leave you in awe.

Isla Iabella is the youngest of the inhabited islands in the Galapagos and provides a quieter, more remote experience, as shown by its dirt paved streets and population of 1,700 despite have the largest land mass.

Come here if: You need peace, quiet, and the Galapagos experience, more remote means better to you, and you have 7 or more days in Galapagos.

Top Things to do in Isabela Galapagos

Sierra Negra Volcano Tour: An interesting ~3 hour hike across an around an active volcano on Isabella Island, the youngest inhabited island in the Galapagos which was acutually formed by these volcanoes

Los Tuneles (The Tunnels) Snorkeling Tour: An awe inspiring snorkeling tour through the shallower (3 ft – 10 ft) waterways around Isla Isabella to interact with meter long sharks, sea lions, rays, turtles, and an array of other sea life in the water ways between a “volcanic desert”

Self-guided snorkeling in Concha y Perla bay: A small bay hosting a variety of marine life and a mere 100 meters from Isla Isabella’s port.  Bring a snorkel, mask, lunch, GoPro and a wetsuit and happily waste an afternoon

Amazingly quiet nights on the beach: Isabella has some of the quietest, most peaceful, most easily accessible beaches that are forgotten by travelers fixated on animal sightings.  Schedule an extra day and take advantage. Playita (Little Beach), Playa del Amor (Beach of Love).

Biking to the Wall of tears and stopping at viewpoints: The ride/hike to the wall of tears is a 6.8km hike from the center of the city, with several very nice hilltop viewpoints along the way.  A great free activity.

Day 1: Fly in, snorkel in concha y perla, rent a bike and ride to the wall of tears

Day 2: Snorkel in Concha y Perla, Rent a bike and ride to the wall of tears

Galapagos’ youngest inhabited island, Isla Isabella, has guided tours that give a taste of everything that Galapagos has to offer

#1. Los Tuneles (The Tunnels): $110, 7am-12pm or 12pm-5pm: An amazing snorkel adventure through water tunnels created by the lava follows that made Isla Isabella.  The result are calm, clear, and shallow waters teaming with marine life.  Above the water, you see a volcanic rocky desert scape covered with cacti between Albatrosses, Flamingos, Blue-footed Boobies, and Frigate birds.  Below the water, you interact with sharks, sea turtles, sea lions, penguins, sea snakes and more.  Everything from seahorses too sting-rays will make an appearance during your tour.  During the adventure you will briefly swap your fins for sandals to explore the rocky, cactus covered volcanic landscape while nesting Boobies stare at you curiously.  This tour is one of the “must do” tours on Isla Isabella.  Highlights:sharks, playful sea lions, racing penguins in the water and walking through a desert scape floating on the sea

#2. Sierra Negra Volcones (Volcanoes): $45, 7am-12pm or 1pm-5pm – The Sierra Negra Volcano is one of five volcanoes on Isabella Island and has the second largest volcano caldera in the world (Yellowstone comes in first) and is the most active in Galapagos with the last eruption in 20055.  Isabella Island is the youngest inhabited island in the Galapagos archipelago and was formed by the eruption of Sierra Negra and the other 4 volcanoes, which makes the 3 hour hike around the Caldera, and to the amazing vistas of the island that much more impressive. Highlights: Cross “lava fields”, pass the enormous Sierra Negra volcano caldera, enjoy vistas of Isla (Island) Isabella and her many volcanoes, hiking up “Volcan Chica”

#3. La Tintoreras: $45, 9am-12pm or 12pm to 5pm (walking, snorkeling, and kayaking) – “Las Tintoreras” or “The Chasms” are a series off islets created by volcano flows that are actually small underwater canyons and hidden nooks that are home to penguins, sharks, and sea life of all types. On entry to the “Tintoreras” you can see nesting birds of all types (at the right time of year), from penguins to Blue-footed Boobies.  Sharks can be seen here, but most likely while hiking and overlooking the flooded canyons.

Getting to (and from) Isla Isabela

Tips for Your Galapagos Triip

When snorkeling, keep your head down and avoid talking to maximize your interaction with the animals.  Avoid chasing them and be calm and sea lions, sharks, and fish will curiously (and harmlessly) come to you.  Bringing your head out of the water or talking creates unnecessary noise that scares them off…so does chasing them

Get a thick wetsuit!!: For any open water activities, insist on a long wetsuit at least 3mm thick, optimally 4mm or 5mm if you get cold easily.  Note that with a 4mm or 5mm suit you will be so buoyant that diving below the surface when snorkeling will be very difficult

Alternate between self-guided tours and boat tours: With a wetsuit and snorkel, there are many great sites to swim and snorkel with sea lions, sea turtles, and sharks on your own.  For birdwatchers, there are several nesting locations that can be hiked to with little difficulty to see boobies, frigates, and pelicans

Keep an eye on the bull sea lion (aka the biggest ones) when snorkeling: Most wildlife on Galapagos is so used to having people around that they will not react.  On the other hand, sea lions will play and invite you in.  Allow them to approach you (not the other way around) and avoid touching and they will stay playful.  As for the bull sea lions, if you area snorkeling and notice a bull sea lion continually swimming a line and barking, he’s marking his territory.  Stay on the far side of that line (away from the colony) and you are very safe…but still stay aware of where the bull is

If you’re torn between diving and snorkeling, go snorkel:The divers I observed (at Leon Dormido) went through 10x the hassle we went through, as snorkelers, and saw less sea life than we did…they didn’t get to see the hammerhead shark we saw.  Oddly enough, this happened to most of the divers I met.  Unless you get the chance to dive at Darwin, Wolf, or Genovesa, save yourself a lot of hassle and snorkel instead.

Keep in mind that animals follow food sources and breeding patterns which means you may not see a certain animal in a specific place all of the time.  Prioritize the list of animals that uyou would like to see, then double check your tour locations with the time of year to plan which tour (and animal chase) is

Where to Sleep on Isla Isabella

A few places to rest your head on the island

Casa Rosada (Formerly Coleta Iguana): This place comes highly recommended by other bloggers and local agencies as it is located right on the beach and has a bar, right on the beach,but beware, it can be pricey (we paid $50 for a private room and no breakfast during low tourist season) and the hot water can take a long time to warm up in the showers, but the views from the rooms are AMAZING!!

Where to Eat on Isla Isabella

Most of Isabella’s eating options lie on the main drag in the center of town on Antonio Gill street.  For the budget conscioustake advantage of the almuerzo (lunch special) as it comes with an entrée, side, salad, and drink for around $5-$7, and load up! In other words, eat two lunches if you can squeeze it in.  Beyond that, every eating option will be in eyeshot.

Coco Surf (Restaurant, Dinner):  If you’re craving something recognizable for dinner. Prices are average for the island, but the dishes (and their tastes) are more reliable as they dish up some of the best food on the island.

Unnamed Convenience Store (Mini-mart, Beer and munchies): This place is a jackpot for loading up on snacks and avoided the high prices for beer and cocktails at restaurants.  Come here and pick–up a Corona for $3 and hit the beach to enjoy paradise.  FYI, all of the restaurants walk over to this place to buy alcohol and beer, so jump oon the bandwagon.  Recommendation: For snacks, try the patacones (plantain chips).  They’re delicious and cheaper than your usual snacks because they’re local to Ecuador

Cafe next to Coco Surf (Café, Breakfast): I lost the name of this place and it was a fantastic option before the morning tours.  Head to Coco Surf and it’s the café on the left.  Look for the smell of deliciousness

Everything you need to know about Dinero on Isla Isabella