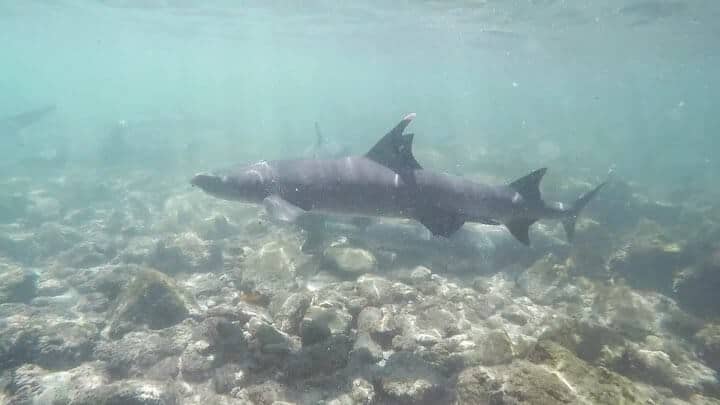 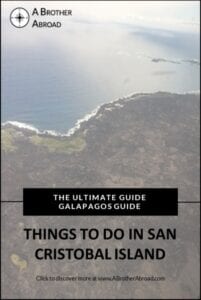 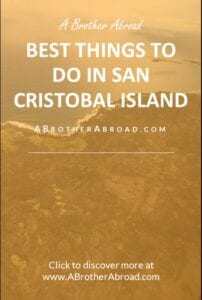 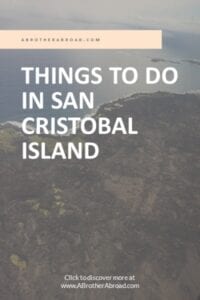 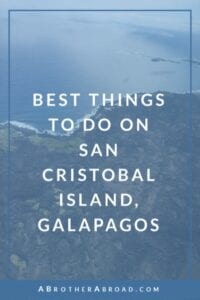 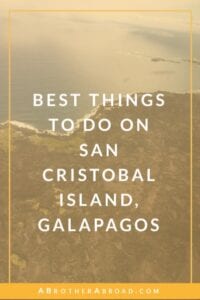 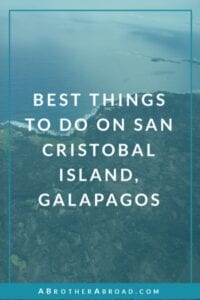 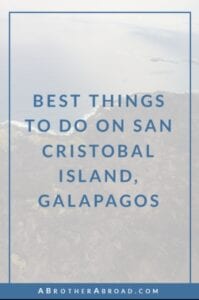 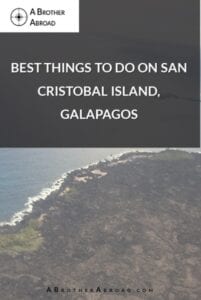 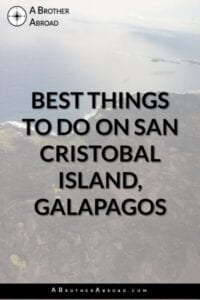 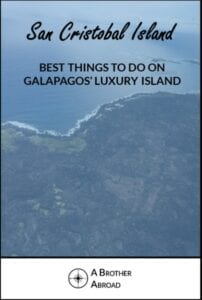 The posh way to experience Galapagos: San Cristobal Island gives you the animals, the beaches, and the craft cocktails…if you’re up to pay the price

San Cristobal Island offers everything in comfort.  If you’re only going to one island, make it this one. With the variety of things to do in San Cristobal and the creature comforts after the adventures you’ll combine the best traits of of exploration and vacation. Read on for the ultimate guide to San Cristobal Island

Top Things to Do in San Cristobal

Leon Dormido/Kicker Rock: A snorkel/diving tour around two spires in the middle of the pacific extending 500 feet above and 130 feet below the ocean’s surface. Animals to see: Hammerhead sharks, sea lions, sunfish, and sea turtles

360 tour: An excellent boat tour continuing around San Cristobal alternating between snorkeling adventures, hiking, and relaxing beaches along the way. A perect complement to the Leon Dormido/Kicker Rock tour

La Loberia beach and hike to bird nesting cliff: An easily accessible beach swarming with sea lions and home to sharks and sea turtles too. Hike past the beach for amazing views and bird nesting areas along the cliffs

Sunset at Punta Carola: A beach 15 minutes walking from the main port with a perfect view of the sunset and filled with docile sea lions and their pups providing quirky and relaxing entertainment

Cocktails watching the seals on Playa Mann: So here comes a fun game! I can’t remember the name of the restaurant, but it provides amazing, innovative cocktails facing the sunset and Playa Mann which is also filled with entertaining sea lions.  The cocktail specials range from the ordinary (mojitos and caipirihnas) to the extraordinary (spicy sunset).  Only go for the extraordinary, and possibly a side of ceviche, here and you won’t be disappointed

Day 5: Kayak/Paddle board out from Playa Mann, Fly out

Galapagos’ poshest island, Isla San Cristobal, has guided tours that give a taste of everything that Galapagos has to offer from one convenient hub

#1 Leon Dormido/Kicker Rock and Manglecito BeachTour: $140, 9:00am – 3:00pm.  A MUST!!!  This open water snorkeling spot and tour lets you see sea lions, sea turtles, tons of colorful fish, and potentially hammerhead sharks and sunfish swimming around a 150 meter tall rock that extends to unseen depths. If you’er are a junkie for being in the water, this is your top tour

#2 Isla San Cristobal 360 Tour: $140 with wetsuit, 7:30am – 4:30pm.  A (secondary) MUST!!! An all-day boat tour that takes in the best of San Cristobal by cruising around the entire island stopping at top snorkeling spots and beaches along the way.  If you are more of a  sightseer than a snorkeler/swimmer, this is your top tour

#3 La Loberia: Free, 6:00am – 6:00pm. A pleasant beach accessible by a short taxi ride and a shorter walk (500 meters) to a bay and beach that a sea lion colony calls home.  With the baby sea lion pups swimming in the water with sea turtles, sharks, and rays, this is an excellent self-guided snorkeling day trip.  The number 1 independent thing to do, if you like swimming and lounging with sea lions

Everything to Do in San Cristobal Island

Leon Dormido/Kicker Rock and Manglecito BeachTour: $140, 9:00am – 3:00pm.  A MUST!!!  This open water snorkeling spot and tour lets you see sea lions, sea turtles, tons of colorful fish, and potentially hammerhead sharks and sunfish swimming around a 150 meter tall rock that extends to unseen depths.  148 meter high rock that is a site for amazing snorkeling and diving. When diving and snorkeling, sea lions, Galapagos sharks, Hammerhead sharks, sunfish, and sea lions can be seen.  Above water, blue-footed boobies, masked boobies, frigates, and pelicans can be seen.  The site is formed by two rock spires sticking out of the ocean and forming a more peaceful channel filled with sea life.  From viewpoints on San Cristobal, the rock appears to be shaped like a sleep lion giving it the Spanish name Leon Dormido

Isla San Cristobal 360 Tour: $140 with wetsuit, 7:30am – 4:30pm.  A (secondary) MUST!!! An all-day boat tour that takes in the best of San Cristobal by cruising around the entire island stopping at top snorkeling spots and beaches along the way

Interpretation Center: Day trip on San Cristobal. Center dedicated to understanding the origins of the Galapagos Islands.  Displays explain how volcanoes formed the Galapagos Islands, the evolution of the species on the island, and the history of the first human settlement (6:30AM-5:00PM Mon-Sun)

Puerto Grande: A recreational site located in front of Leon Dormido/Kicker rock.  The bay is surrounded by mangroves and the calm waters are suitable for swimming. Lava Gulls, pelicans, and blue-footed boobies can be seen here.

Lobos Islet: (Boat Tour) An islet one hour boat ride from port that is a nesting site for blue-footed boobies and frigate birds. On the boat ride, pelicans, and various birds can be seen.  On the snorkeling tour young sea lions, stingrays, and sea turtles can be seen.

La Loberia: (Taxi Ride + Short Walk) A beach and bay protected from the surf and home to a colony of seals.  An excellent self guided attraction. Just bring a snorkel and fins to swim with sea lions, sea turtles, and small sharks. Surfing beyond the edge of the bay is possible for very experienced surfers (6:00AM to 6:00PM Mon-Sun)

El Progreso: The first human settlement on Galapagos which is now an archeological site and tourist attraction

Punta Pitt: A volcanic tuff rock formation where all three types of boobies (blue footed, red footed, and masked) and both types of Frigate birds can be observed nesting

Galapaguera Center: Center for a project to repopulate San Cristobal Island with Galapagos tortoises.  The project is conducted by Galapagos National Park

Manglecito: (Boat Tour) This site consists of a beautiful beach in one section and mangroves in another section.  The beach is beautiful with white sands and calm.  Across from the beach is a colony of very friendly sea lions that can be easily snorkeled with.  Small sharks, rays, and box fish can be seen here too while snorkeling.

Puerto Chino Beach: A white sand beach great for relaxing. The beach is a 45 minute taxi ride and 15 minute walk from the main port on San Cristobal.

Playa Punta Carola: Located a 10 minute walk north of the San Cristobal Port, the beach is filled with a large colony of sea lions that you can relax between and the rocks are covered with Marine Iguanas.  This beach offers an excellent view of sunset on clear days.

Cerro Tijeretas: A hill and viewpoint overlooking San Cristobal island and great views of the Frigate birds.  The viewpoint is a 2km hike from the San Cristobal Interpretation Center (about a 2 hour walk) and the trail continues toward beaches (Playa Punta Carola) after the viewpoint

Getting to (and from) San Cristobal

From the mainland: Flights from the mainland are cheapest from Guayaquil and cost ~$180 every Sunday, Tuesday, and Thursday, so plan accordingly, and ~$200 from Quito

Flights to Isabella: Run $120 on special during low season and minimum $150 during high season, but the 45 minute ride saves an entire day of travel

Tips for Your Galapagos Triip

Get a thick wetsuit!!: For any open water activities, insist on a long wetsuit at least 3mm thick, optimally 4mm or 5mm if you get cold easily.  Note that with a 4mm or 5mm suit you will be so buoyant that diving below the surface when snorkeling will be very difficult

Alternate between self-guided tours and boat tours: With a wetsuit and snorkel, there are many great sites to swim and snorkel with sea lions, sea turtles, and sharks on your own.  For birdwatchers, there are several nesting locations that can be hiked to with little difficulty to see boobies, frigates, and pelicans

Keep an eye on the bull sea lion (aka the biggest ones): Most wildlife on Galapagos is so used to having people around that they will not react.  On the other hand, sea lions will play and invite you in.  Allow them to approach you (not the other way around) and avoid touching and they will stay playful.  As for the bull sea lions, if you area snorkeling and notice a bull sea lion continually swimming a line and barking, he’s marking his territory.  Stay on the far side of that line (away from the colony) and you are very safe…but still stay aware of where the bull is

If you’re torn between diving and snorkeling, go snorkel:The divers I observed (at Leon Dormido) went through 10x the hassle we went through, as snorkelers, and saw less sea life than we did…they didn’t get to see the hammerhead shark we saw.  Oddly enough, this happened to most of the divers I met.  Unless you get the chance to dive at Darwin, Wolf, or Genovesa, save yourself a lot of hassle and snorkel instead.

Consider flying between Isabella and San Cristobal if you’re pressed for time: The flights are $120 on the cheap side for foreigners (normally ~$150) and $80 for locals.  Thee total fligh time between islands is about 45 minutes and depart around 1:00pm daily

Everything you need to know about Dinero on San Cristobal