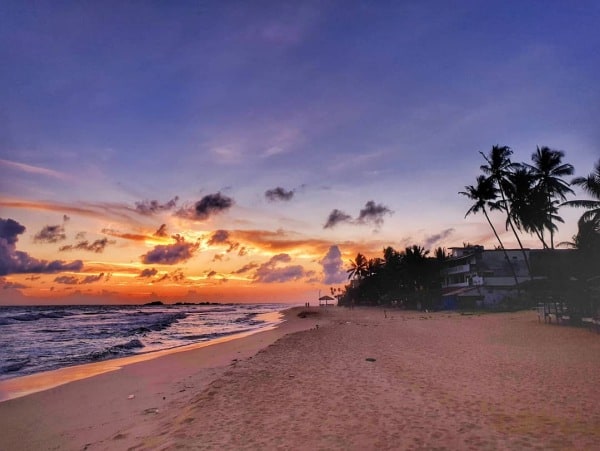 For surfers throughout Southeast Asia, Hikkaduwa Surf is legendary.  Countless breaks with at least a few pumping at all times of day when in season and long rides make Hikkaduwa worth traveling halfway around the world to experience.  But being half a world away, it can be a pain planning the breaks to surf, when, how to get there, and then navigating the language and culture along the way.

I passed through Hikkaduwa on the way to Arugam Bay and found it charming, cheap, and surf spot of near epic proportions from November to April

Read on for the Hikkaduwa surf guide to help you max out your time on the waves in Sri Lanka.

Contents of this Hikkaduwa Surf Guide

Located in southwest Sri Lanka just 2 hours from Colombo, Hikkaduwa, a former fishing village, is now a developed surf town with 3ft to 10ft waves when pumping stretching along the coast with breaks suited for everyone from beginner to advanced. In season, November to April, the crowds are ample, the waves are perfect, and the weather is nice. With Hikkaduwa being only a couple of hours from Colombo by 2-3 hour train (for $2 to $7 USD) this is the perfect surf spot in SE Asia between November and March, during Bali’s wet season.

For new surfers, boards are easily rented (~2000 LKR / $11.50 USD) and there are nice, beginner-friendly foamy and green waves in front of the bars and restaurants of Hikkaduwa’s main beach and a bit further south.  For intermediate and advanced surfers, plan to bring your own ride as the local gear will be a bit worn, but you’ll find plenty of waves from the main break (on Sun Beach) and further north.

To get into Hikkaduwa, plan on a taxi ride, Uber, train, bus, or renting your own tuk tuk (that you drive). Read on for more about getting from Colombo to Hikkaduwa.

Hikkaduwa is an epic surf joint because there is always a place to surf thanks to the constant swell, and plenty of reefs make for near-perfect breaks for adventurous intermediate and advanced surfers. In the offseason, plan on sparse surf days (1 out of 3) as the unsheltered breaks get messy due to storms on the open ocean. From April to November, do yourself a favor and head further south to the sheltered breaks around Galle and Welligama, or better yet head straight to Arugam Bay which is pumping, lively, and perfect from April to November.

Read on for a Hikkaduwa surf guide that’ll tell you which breaks to hit, how to get there, when to go, and all of the other tips you need to max out your Sri Lanka surf vacay in this legendary counterpart to Arugama Bay.

When To Surf Hikkaduwa

November to April is the best time of year to surf Hikkaduwa, when the wind consistently rolls offshore and it rarely rains.  Peak season is December to January as surfers and tourists descend.

Outside of this season, Hikkaduwa turns into a ghost town while the ocean stays choppy and messy. If you must surf the south coast, head to Weligama.

Weather and Seasons in Hikkaduwa

The Breaks to Surf in Hikkaduwa

As Sri Lanka has blown up as a surf spot recently known around the globe, the kooks have descended and severely upset the locals at times – making locals super sensitive to bad surf etiquette and fights have broken out in the water.

Counteract this by going into the lineup super chilled and giving the locals their respect until you’re a familiar face – they just need to see you’re just another surfer open to sharing the wave with no intention to drop in or snake anyone.  If you do have a kook moment and screw up, just pull out, apologize, and let the moment ride.

I highly recommend staying at Funky Hotel, collocated with Funky de Bar. The rooms are clean and modern, the staff is chill, and the bar is literally situated on the beach, right in front of the main break – so you walk 10 feet to hop in and paddle straight out.

Where to Eat and What to Eat

Don’t plan on dorm style hostels in Hikkaduwa (or Sri Lanka) being a common thing as hotels and guesthouses are the norm.  Expect budget accommodations to start from ~$15 USD for a private room, and go up from there with luxury accommodation being quite reasonable with plenty of high standard accommodation options for less than $100 USD.

Meal: Anywhere from $1 to $10 for a good curry meal with rice, depending on how swanky you want to go.

Boards are available for rent for cheap in Hikkaduwa, but plan on well worn foam boards and dinged up minmals/funboards.  If you’re a new surfer, don’t sweat it.  If you’re intermediate/advanced and expecting to rip, bring your own board. Board rental is expensive (2000 LKR / $12 USD) for the quality of gear. Consider bringing your own board and plan to sell it before you leave.

If bringing your own surfboard and planning to come by train, plan on taking the 6:50AM First Class Train from Colombo Fort station (in Colombo) for 1000 LKR / ~$7. This train is the only one that you can reserve and that will allow you to carry a surfboard. I brought mine this way and it worked out perfectly. The second class trains from Colombo to Hikkaduwa , which also run at 8:30 AM and 10:30 AM, have overhead space bought don’t count on it being available.

For surfers bringing their own gear, an extra set of fins, an extra leash, and hot weather wax will be useful…as you can plan on paying double the price for what you’d pay for the same quality of gear at home if its available. Join the South Sri Lanka surf Facebook group to get rid of your gear. I’ve seen used boards, of no particular notable brand but in great shape, go for $500 as the surfboarder shaper scene is still getting off the ground in Sri Lanka.

Additionally, know that if you’re bringing a board or gear, locals and surf shops will be willing to buy it at a premium.  Many of the boards around are made and shipped in from Thailand, so brand name and awesome gear is sought after.

Transport to and Around Hikkaduwa

Hikkaduwa is located a 2 hour ride south from Colombo but your options for the ride are train, bus, and taxi

A single first class train, with a reserved seat and baggage space, runs daily at 6:50 AM from Colombo Fort Station to Hikkaduwa station. Price is 1000 LKR / ~$6 USD. Tickets should be booked a day in advance – just head to window number 17 at the railway station to make reservations.

The second and third class trains depart from Colombo Fort Railway train station in Hikkaduwa and beware just because you get a ticket doesn’t mean you have a seat.

Bus from Colombo to Hikkaduwa: Buses depart frequently from the Colombo central bus terminal and cost 100-300 Rupees ($.57 to $1.70) depending on comfort level.  Look for a bus heading to Hikkaduwa or Galle, Tangalle and Matara as all of those buses go through Hikkaduwa as well.  Just confirm with the driver, when boarding, that the bus will pass through Hikkaduwa.

Taxi from Colombo to Hikkaduwa: Can be arranged at the airport or via your host in Colombo, but will run ~$70 and upbut will only last 1.5 hours.

Tuk tuk’s are the mode of transportation of choice, doubling as transportation and tour guides.  Though you could rent a car and drive on your own, Sri Lanka traffic is insane so beware.

The breaks are in short enough distance (2km) that you could walk, but a Tuk Tuk ride will only cost you 150 LKR (less than $1 USD)

~$20 USD can get a tuk tuk ninja as your guide and driver for the entire day to cruise to the breaks north and south of the main drag.

For some unique Sri Lankan flavor, I loved Mama’s. Right on the ocean, good parties (in season) and the Jaffna crab curry is one of a kind and on point. In all my travels, I’ve never had anything like it. It’s on the pricier side by Sri Lanka standards (1500 LKR / ~$9 USD), but you would pay a fortune elsewhere and its amazing. Chicken curry as well as fish, prawn, and veggie is available – all awesome.

For more info, check out a great CNN article on the 12 best Sri Lankan foods here.

Other Things to Do in Hikkaduwa

Surf Camps and Schools in Hikkaduwa