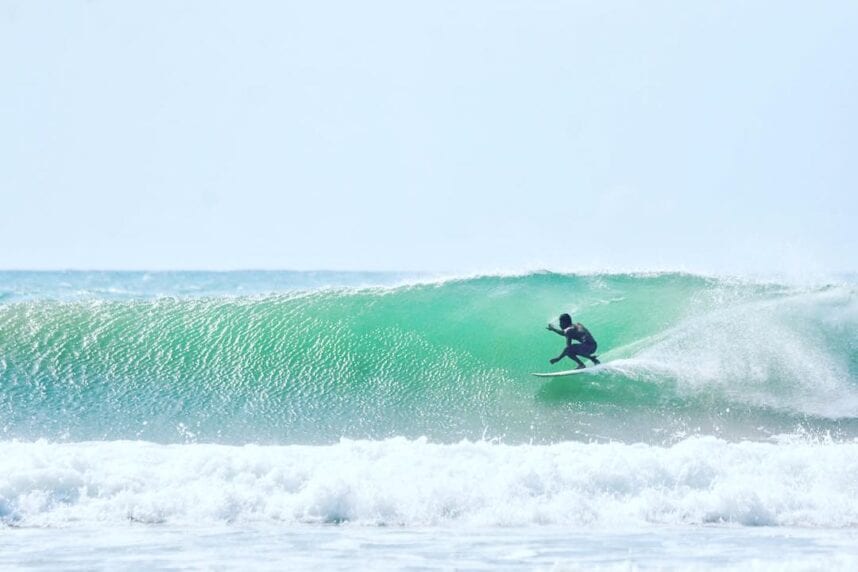 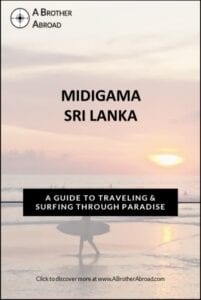 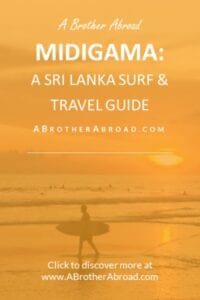 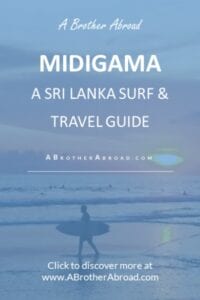 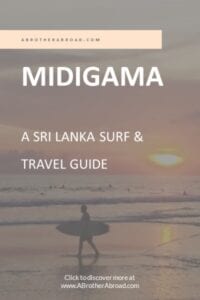 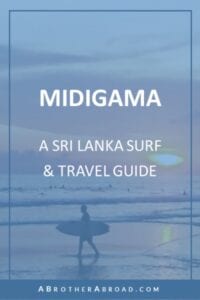 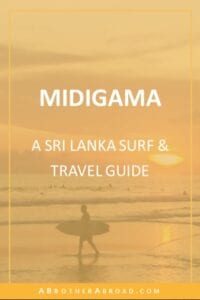 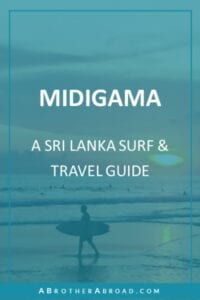 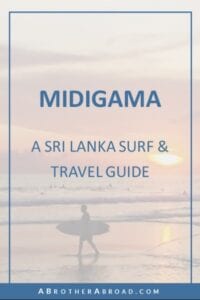 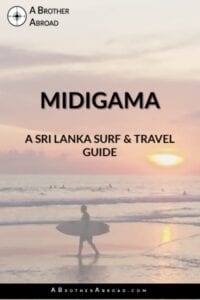 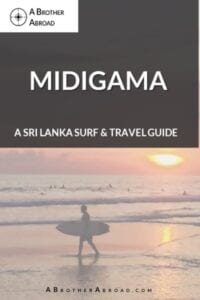 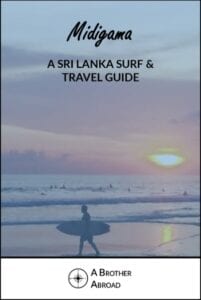 Scoring uncrowded surf spots on Sri Lanka’s southwest coast can be a rarity, but if you’re aware of the Midigama surf spots, its easier than you think.

“Midigama is what Hikkadua was in the 70’s and now lacks”.  Plenty of breaks for all levels are always pumping, and plenty of hidden ones turn on with a 2ft swell or bigger.

If having those waves all to yourself sounds spot on, keep reading for info on the Midigama surf scene, the best breaks, and more.

Contents of this Midigama Surf Guide

Located in southwest Sri Lanka just 3 hours from Colombo, Midigama, a former fishing village, is now a convenient surf stop between more developed surf towns with hollow waves when pumping.  The town itself is much less developed than Hikkaduwa, but the breaks are much less crowded too.

Read on for a Midigama surf guide that’ll tell you which breaks to hit, how to get there, when to go, and all of the other tips you need to max out your Sri Lanka surf vacay in this little brother to **Midigama** and Arugama Bay.

November to April is the best time of year to surf Midigama, and the rest of southwest Sri Lanka, as it is outside of the rainy season and the wind consistently rolls offshore and it rarely rains.  Peak season is December to January as surfers and tourists descend.

Weather and Seasons in Midigama

The Breaks to Surf in Midigama

Other Nearby Towns and Breaks

Boards are available for rent for cheap in Midigama and the rest of Sri Lanka, but plan on well worn foam boards and dinged up funboards.  If you’re a new surfer, don’t sweat it, just rent on arrival.  If you’re intermediate/advanced and expecting to rip, bring your own board.

For surfers bringing their own boards, don’t plan on being able to take that board on the train (extremely packed) or bus (little baggage space) without getting it damaged.  Do plan on hiring a shared shuttle or private taxi.

For surfers bringing their own gear, an extra set of fins, an extra leash, and hot weather/tropical wax will be useful…as you can plan on paying double the price for what you’d pay for the same quality of gear at home if its available.

Additionally, know that if you’re bringing a board or gear, locals will be willing to buy it at a premium.  Many of the boards already in the area are made and shipped in from Thailand, so brand name and awesome gear is sought after.

Midigama is located a 2.5 to 3 hour car ride south from Colombo and about an 40 minutes south of Galle.  Train, taxi, and bus options from Colombo are available.

Train from Colombo to Midigama: From Colombo, just take any of the trains for Ahangama, Midigama, or Weligama railway stations 210 Rupees for ~$1.50 USD.  Ask the conductor for information on when to stop in Midigama.

Bus from Colombo to Midigama: Buses run from Colombo every ~20 minutes, 24 hours a day from the Colombo Central Bus Terminal.

From Galle and Welligama by Tuk Tuk

Tuk Tuk: The only way to explore

Tuk tuk’s are the mode of transportation of choice, doubling as transportation and tour guides.  Though you could rent a car and drive on your own, Sri Lanka traffic is insane so beware.

~$20 USD can get a tuk tuk ninja as your guide and driver for the entire day.

Other Things to Do in Midigama

Click here to take the Travel Survey and help us understand how you travel and learn from other travelers how to travel better. We're aiming to find the best destinations for solo female travelers, outdoor lovers, and everyone on tiny budgets...and we need your thoughts to do it! Help us!