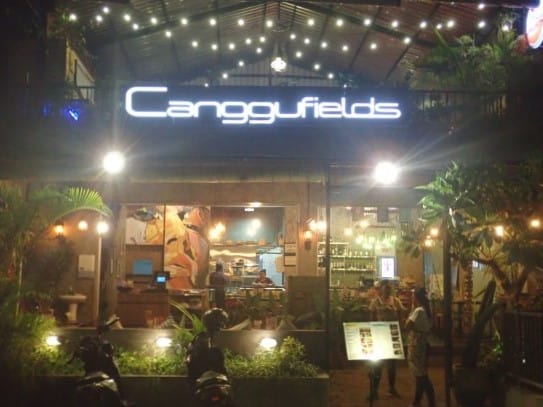 Whether you’re arriving in Canggu after a 40 hour flight or after a whirlwind 10 day Bali itinerary experiencing the “Island of the Gods”, you’ll definitely need to chill and recover – and the Canggu bars are the perfect setting for the flava of relaxation you need.

Bali’s coolest new scene, Canggu, naturally splits up into 3 distinct ‘hoods, each with its own beach – Berawa, Batu Bolong, and Echo.  Each area is awesome, in its own way, strikingly walkable and self contained, and filled with an array of bars, beaches, and eateries, all within short trotting distance.

The Canggu bars list that follows is separated by separated into each area of Canggu – Berawa, Batu Bolong, and Echo – so you can easily find a watering near your Canggu crash pad to start the night, or quickly find a “next stop” in walking distance for your team’s Canggu crawl.

An interesting bar mashup next to the main drag in New Canggu.  Outside, an empty concrete swimming pool hosts skateboarders showing off their best stunts.  Inside, what looks like a barnshed, a swanky interior and classy bar with cocktails and a patio with a classy view.

Finn’s Beach Club (and resort).  A landmark in Canggu. A large, swanky, bamboo laden beach club with an island vibe and a heavy resort feel.  Commonly a concert hub for holidays and big weekends.  Located right on Berawa Beach, you’ll get classy cocktails and amazing sunsets as the surfers ride the waves until the sun goes down.

Note: If you prefer low key, and don’t mind swapping out a cocktail for a beer or coconut, walk west on the beach for 5 minutes to my favorite beach shack – Kokoloko

A low key beach shack with charming locals right on Berawa beach, so close to the water that the ocean nearly touches the restaurant at high tide.  Owned by locals, made of bamboo, and littered with comfy beanbags and umbrellas along the sandy beach stretch in front of the restaurant.  The coconuts are cold, the beer is cheap, and the view is extremely calming.  Come here for a quick lunch or a very relaxing sunset as the beach dogs politely drop in to say hello.

Canggu’s version of a food truck park, a collection of tiny restaurants serving food through windows to enjoy in a bean bag and picnic table laden park, also has a hut dedicated to booze. On Friday nights (and randomly other nights) locals show up and do a damn good job performing low key, live music (acoustic only).  If you’re in New Canggu and want a drink with several snack options in walking distance, check out Berawa’s Kitchen.

Hours: Closes at 4AM

Location: Near “the shortcut” on the new side of Canggu

A staple in Canggu and in the hub of Canggu’s restaurant, bar, and nightlife action.  Most nights out in Canggu start here, thanks to Old Man’s 2 for 1 happy hour from 5PM to 6PM, which perfectly times with watching the sun set into the ocean while the surfers finish out their sessions.  Music plays, the crowd is gregarious and friendly, and dinner options (or bar upgrades) are a short walk away.

My routine was to show up and surf until 5:30pm, turn in my board, buy 2 beers for $1 USD, and watch the sunset from Old Man’s couches while I chatted up locals and passers through. Beware, Wednesday gets rowdy (in a good way) with the beer pong tournament, live music, and whatever other fun the crew decides to come up with.

Location: Right on Batu Bolong beach in the middle of all the action, making it the perfect place to start a night

As classy as you can get in Canggu while maintaining the beachy, island vibe.  By day, The Lawn is a swanky green patch overlooking the ocean and filled with umbrellas, bean bags and tables low enough to lounge on the ground. Impressive cocktails and even better food round out the experience.

By night, The Lawn becomes something more akin to a Las Vegas bar, as beach beds come out in the VIP section next to the infinity pool for anyone who buys a bottle of champagne (~$120 USD) or otherwise while the dancefloor rages.  If you want to class up and keep the energy up, head to The Lawn

Location: In the heart of the action in Canggu, on Batu Bolong Beach, next to Old Man’s Bar

If you get kicked out of Old Man’s when its closing and still had a little life (and ratchetness)in you, walk down to Sandbar and keep the night going.

Hours:  I have no idea when this place closes…or if it ever even closes…

Another swanky joint walking distance from Batu Bolong beach that is more restaurant than bar, but their street side “front lawn” with high top tables is a great, relaxing place to work through their menu of craft cocktails. The food ain’t bad either.

If “The God of Machines” did create a bar and restaurant, this would be it. In the front, a quiet area that caters to restaurant goers.  In the back, a full venue aimed at dancing and live music that is scattered with lawn chairs and tables by day but cleared free for the party by night.  Two bars at opposite ends (one in front, one in back) keep the booze flowing.  If starting the night at Old Man’s isn’t your thing, start here.

As a lover of motorcycles, I highly recommend visiting during the day as half the complex displays beautiful “retromod” motorcycles, including access to the shop where the custom motorcycles are built and a workshop where the Deus Ex Crew custom designs surfboards.  Buzzed or sober, wandering around this adrenaline actory is a treat and the vibe at night is awesome too.

Hours: 7AM to Midnight

More well known for their shops, weekend market, and frozen yogurt bar, Love Anchor serves food as well. If you’re wandering the main street in Batu Bolong area any given day and feeling thirsty, this is a solid spot to stop off at for a day drink before mozying on.

Like Konkrete without the swank.  Pretty Poison Bali is a grittier bar is built completely around a drained swimming pool with seats and bleachers wrapping around so bargoers (aka spectators) can watch as locals and transplants show off their best skateboarding moves.  A great plus is the dimly look lookout over the ricefields behind the bar & skate bowl.

Pretty Poison is a good midpoint to plan in your night as the vibe doesn’t get amped until later in the evening and it’s also located at the midpoint of “The Shortcut” between the Berawa Beach area and the Batu Bolong Beach area, making it a perfect place to drop in while passing between the two.  If you’re in Canggu longer than a week, you will go to Pretty Poison at some point

Location: Located on the middle of “The Shortcut” between Berawa Beach area and Batu Bolong Beach area

A Pablo Escobar themed bar. Need I say more?  On certain nights…it gets lit. I’ll leave the adventure of finding out that night to you

If the swank, hipsterism, and beachy vibes have you worn out, seek shelter.  Gimme Shelter is a full on rock bar. On low notes, the interior and vibes mimic dive bars back home in the US. When things get lit, with local performers, the rage is like a full on rock concert.  So, if you need a different flavor of night to mix things up, try Gimme Shelter.  If you want dive bar feel, go early. If you want the rage, go late.

Location: A walk away from Batu Bolong beach, or 3 minute ride, hidden between rice fields in a large, non-descript shed.

Possibly the best view in all of Canggu.  Situated on the rooftop of Hotel Tugu Bali, this restaurant and bar serves Asian fusion cuisine (mostly Japanese inspired) and cocktails with a panoramic view of Batu Bolong beach and Canggu from 3 stories up. The view is amazing and worth at least one visit. Very calm ambiance.

Location: In the heart of the action in Batu Bolong, across from The Lawn and Old Man’s, 1 minute walking from Batu Bolong Beach

Imagine what a restaurant would be like if it maintained the ambiance of a candlelit dinner without the candlelight. That is The Slow.  Amazing, gourmet food and cocktails that are just as good.  The scattered layout of an island bar, communal tables, and couches with coffee tables make it perfect for eating in or just enjoying a cocktail with someone.  FYI, this is commonly mentioned as one of the best restaurants in Canggu, so if you come for a cocktail then stay for the food.

Stay long enough and you’ll notice that the picnic benches in front of the Star Mart and CocoMart mini marts get used heavily, whether to meet up or to enjoy a drink.  If you’re a long term traveler and passing through, give this a shot (when you see crowds around) to meet others on the same program as you

This project is possibly one of my favorite that I stumbled on in Canggu. A cool coffee shop by day, and a great restaurant and bar at night, with comfy floor style seating and tables that looks of rice fields in a dimly lit hangout area.

The interesting thing is Indosole is a shoe company that came to be by upcycling old tires, turning them into shoes and making sandals that rival Havaiianas. Its Canggu Indosole store is also attached and right next door to browse.  This spot is at once shoe showcase store, cool coffee shop, and stylish bar with eats.  This spot could easily fit into Venice Beach, California or Austin, Texas.  I think Indosole is giving Tom’s a run for its money

Hours: 8AM to Late

Location: 3 minutes from Echo Beach in the “Canggu Fields” area

Part of a tiny cluster of bars in a growing area, just between Echo Beach and Batu Bolong beach.  As this area is still sprouting, you’ll likely have to bring your own crowd but the setup is a great place to start the night before moving east to Batu Bolong Beach area, especially if you’re staying near Echo Beach.  Great ambiance, good eats.

Location: Between Batu Bolong Beach and Echo Beach, a 5 minute drive to either

Location: In the “Canggu Fields” cluster of restaurants located between Echo Beach and Batu Bolong, about 5 minutes from both

Close to Echo Beach and off the beaten path from the Batu Bolong chaos, Grass Terrace Bar is a solid option for grabbing a simple drink in a mellow atmosphere with a little fresh air

Other Canggu C You May Enjoy…